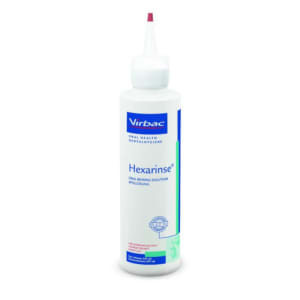 Hexarinse is for use during and/or after routine dental procedures for cats and dogs.

Hexarinse is also suitable for ongoing home use and is formulated with chlorhexidine gluconate to help control levels of bacteria in the mouth.

Click here for Virbac's guide on cleaning your pet's teeth.